Last weekend, the team from Cosentino Australia were at the 2012 Moto GP with Jorge Lorenzo, the four-time world motorcycle champion. Cosentino’s leading brand Silestone is the sponsor of the Majorcan motorcycle racer, who bears the, Silestone® logo on his personal cap.

Gary Isherwood, Country Manager Cosentino Australia comments, “We attended the Moto GP last year when we first arrived in Australia and the growth we have had in the last 12 months is phenomenal. This year, we had around 32 people attend each day of the event, with a wide mix of clients from different channels including our valued Australian and New Zealand distributors, Galvin Hardware (WA & SA), Heritage Stone (Tasmania) and Silestone New Zealand.”

“It was such an exciting experience to be at the Moto GP race and see Jorge Lorenzo take out another World Champion title. We’re really proud to have an international leader like Jorge aligned to our brand. Silestone is about quality and best practice, so it’s a perfect fit for us”, adds Isherwood.

Cosentino Group is a worldwide leader in the production and distribution of quartz surfaces, natural stone and reconstituted surfaces. Launching in Australia at the end of 2011, the multinational company creates innovative and functional natural stone and reconstituted solutions for the home and public spaces, focusing its product creation on beautiful design, innovation and environmental respect. 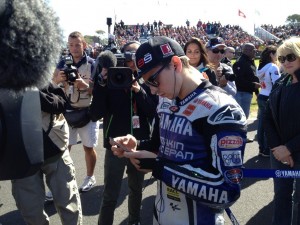 for download click image
November 6, 2012 Categorised in: News, Top Faces
Previous article
Cosentino Group will supply its products to 227 new hotels in the next year.