Silestone®, worldwide leader in quartz surfaces, launches its new series: Silestone® Nebula. This innovative collection comprises of six colours inspired by nebulae in the universe. Nebulae are celestial phenomenons that emit a halo of supernatural light, giving rise to the formation of stars.

Astronomy lovers can find a universe of inspiration in the Silestone® Nebula collection, with new designs that have warm, natural colours. Thanks to the chromatic diversity, resistance and adaptability, Silestone® Nebula offers the possibility of creating new atmospheres bursting with design and style. 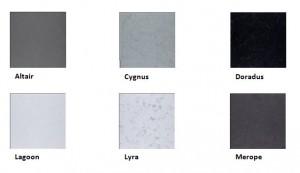 This new series of Silestone® colours have the same extraordinary physical-mechanical characteristics: hardness, resistance to impacts and scratching, low absorption as well as a unique bacteriostatic property that improves its hygiene. On account of these characteristics, Silestone® Nebula is the ideal choice for decorating kitchens and bathrooms.

Altair, Cygnus, Doradus, Lagoon, Lyra and Merope are the colours that have emerged after a research and development process using the latest technology. As a consequence of this process, these six new colours have been characterised by their immense beauty, deep base colours, movement, continuity of veins, diffused colours, original forms and standardised design between slabs of the same colour. Cosentino is also pleased to announce that the newest colours, Vortium and Dinux, will be available exclusively for six months to the approved fabricators network, after which they will become available for open sale.

All Silestone® Nebula colours are available in polished and leather (matte) finishes and in large format (325x159cm).

Once again, Silestone® is at the cutting-edge of design and innovation.

Silestone® by Cosentino, worldwide leader brand in quartz surfaces, consists of more than 90% natural quartz. This high-tech material is highly resistant to stains, knocks and scratches, and has a low level of fluid absorption. It also has an exclusivity bacteriostatic property, several product guarantees and certificates and the upper level of service, quality and responsibility of the Cosentino Group. Silestone® comes in over 60 colors, three textures and several different formats. Thanks to these special properties, Silestone® surfaces are highly suitable for the kitchen, bath and other demanding areas such as laboratories, hospitals, hotels, restaurants and so on.

Silestone® is present in some of the world’s most unique constructions, such as the Hotel Burj Al Arab in Dubai, Wembley Stadium in London, the Torre Agbar in Barcelona, and Telefónica’s flagship store in Madrid.  Pioneering quartz surface, Silestone® has revolutionized the global stone industry and its growth has been unstoppable, to the point where it has become the world’s leading brand. Today, in Spain one out of four kitchens have Silestone® while, in the USA, Silestone® has a market share of 75% of all quartz surfaces and 7% of all kitchen worktops.

Silestone® was the first quartz surfaces brand to advertise in the biggest publicity event in the world, the US Superbowl. In addition, since 2008, the brand has been personal sponsor of two-time Formula 1 World Champion, Fernando Alonso. Silestone by Cosentino® also sponsors the Houston Rockets team in the NBA.

October 17, 2012 Categorised in: News, Top Products
Previous article
Design your own kitchen and bathroom with Silestone®