ECO by Cosentino® chooses its new colours on social networks

The Cosentino Group, world leader in the production and distribution of quartz, natural stone and recycled surfaces, has launched a new range of colours for ECO by Cosentino®, a recycled surface comprised of 75% recycled materials.

This is the first time that the end consumer has been involved in choosing the four new colours for ECO by Cosentino®. Users were invited to vote for their favourite colours in an application developed for Facebook that was launched in 14 countries.

After voting had closed, it was announced that the colour with the most votes was Grey Moss, which will be included in the new ECO® colour series. The other three colours in the new collection will be Creamstone, Red Pine and Forest Snow, which were chosen after taking into account the other votes and after conducting a survey with a panel of well known designers during the KBIS 2012 show in Chicago.

The new ECO by Cosentino® colours are characterised by their depth and elegance, and aim to cater for the tastes and preferences of consumers in all markets.

With these new colours, ECO by Cosentino® now offers a wide and varied range of colours suited to all designs and projects, both private and public. 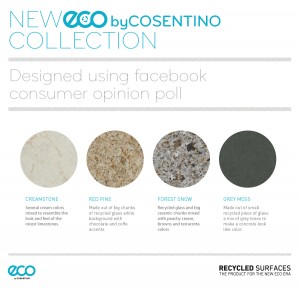