Dekton®, Cosentino’s ultra-compact material and new surface of the Mutua Madrid Open, is off to a strong start in Spain’s biggest tennis tournament, all thanks to a spectacular kitchen set that will characterize the tournament’s leisure offering until 8 May. To inaugurate this unique “live cooking” space, this morning a unique cooking demonstration took place, featuring three Michelin starred chef David Muñoz and tennis players Feliciano López, Fernando Verdasco and Eugénie Bouchard.

Muñoz led the show, producing live one of his now-famous culinary creations in the form of a canvas, inspired by the tournament. For their part, the four tennis players demonstrated their own culinary prowess and casually assisted the chef in preparing the dish before immortalizing the moment, without a doubt one of the most surprising and interesting of the weekend, with several photographs. 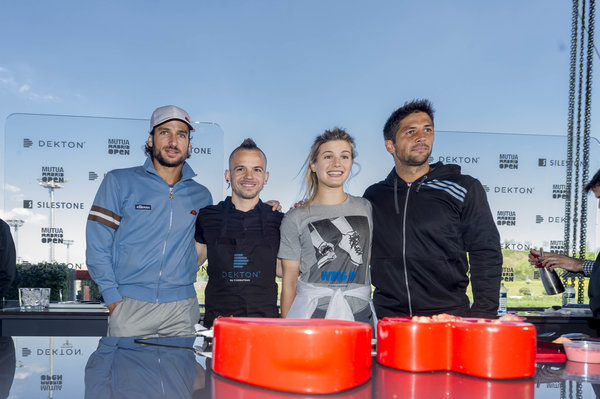 Other attendees at the event included Manolo Santana, Director of the Mutua Madrid Open; Gerard Tsobanian, President and CEO of the tournament, and Francisco Martínez-Cosentino, Chairman of the Cosentino Group, the day after it was made known that the latter had been honoured with the Medal for Merit at Work by the Spanish Government.

This performance opened the cooking demonstration set, brought to the Caja Mágica by Dekton® to allow all Mutua Madrid Open attendees to discover “the recipe for success”. Until next Sunday 8 May, prestigious chefs and Cosentino partners such as Andoni Luis Aduriz, Dani García and Diego Guerrero, among others, will be using this space to perform live demonstrations of some of their best-known recipes, with the support and collaboration of a variety of well-known Spanish personalities and celebrities. In this way, the Madrid Open will provide a framework for Dekton® to bring together the prestigious Michelin stars with the stars of the sporting world. 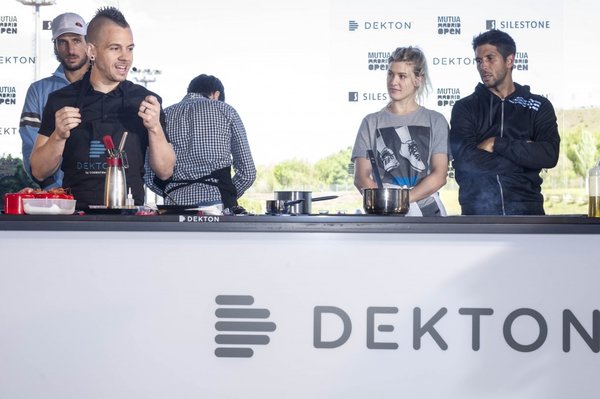 This cooking stall will also house an interesting brand initiative in the realm of social media throughout the two-day tournament, to be combined with the activities already set in motion for the Facebook prize draw. Anyone who visits this space, located in Area -2, will be able to take a Polaroid photo of themselves, and by simply uploading this photo to their Twitter profile with the tournament’s hashtag and mentioning Dekton®, they will receive a pair of sunglasses and be entered into a prize draw to win a dinner at Tatel restaurant in Madrid.

Another activity that Cosentino’s brand of ultra-compact surfaces will be carrying out over the course of the tournament will be the “Dekton® Charity Table”: a ping-pong table made from this material that will be signed every day by one of the major tennis stars in attendance at the Madrid tournament. Once the tournament is over, this table will be sold at auction, and the proceeds will go towards Father Ángel García Rodriguez’s Messengers of Peace Foundation.

Finally, thanks to the excellent properties of the material and its infinite possibilities for design and application, Dekton® will also be a protagonist over the weekend, as it has redesigned several of the Caja Mágica’s areas and spaces, from an impressive mural dominating the access to the VIP spaces to the various bar and countertop applications. But the main highlight is the creation of a corridor constructed from the latest Dekton® collection XGloss, which also featured in the recent Madrid Fashion Week. This presence is shared with Silestone®, world-leading brand of quartz surfaces, whose presence is felt in the spectacular bars and reception counters distributed throughout the terrace and the various catering spaces in the VIP area.