The world leader in the production and distribution of quartz and other natural stone surfaces, Cosentino will be opening 10 new distribution centres in the United States. These openings will involve a total investment of 24 million euros and seek to strengthen the leadership of the Spanish company in the quartz market in North America. Furthermore, this investment aims to enhance the Cosentino Group’s logistic and distribution network, under a unique business model in the natural stone industry worldwide.

The centres will be located in key cities for the American market, including San Francisco, San Diego, Minnesota, Cincinnati, Kansas City, Denver and Portland, among others. They will join 12 other Cosentino Group centres, which are already operating in the United States, as well as 15 kitchen worktop and other cut-size factories. The objective of the multinational company is to have 22 centres operating at the end of 2012, with a strong commitment to accelerate growth in this key market. 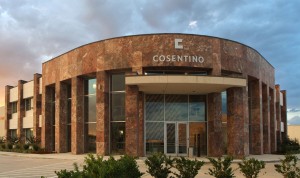 Additionally, due to the size and logistical complexity of the United States, Cosentino opened a large logistic centre or hub in the port of Houston in mid 2011. Houston is also where the headquarters of Cosentino North America are located. Due to its commitment to this market, Cosentino is now looking for a possible second hub or central logistic centre in another location.

Francisco Martinez-Cosentino, Chairman of the Cosentino Group says that this new facility, “will allow us to reach even more customers efficiently, increase commercial presence and implement our business model with greater strength. In the case of the United States, it not only helps to reach growing numbers of stone masons and home centres, but also kitchen studios, designers and architects.”

The announcement of these openings took place at the recent ‘Cosentino 100’ Distributors Convention held in Mexico, which was attended by more than 200 customers, from over 70 companies from the stone and decorative sector in the United States and Canada.

With over 15 years presence in the United States, Cosentino has built a successful business. In 2011, sales in the North American market amounted to 193 million euros, representing almost 50% of the total global sales. This figure represents an increase of 8% compared to 2010, where sales reached 179 million euros. Thanks to this strategy for the US market, the Cosentino Group expects to grow 18% annually until 2013, achieving estimated sales of 262 million euros for that year alone.

At the recent Distributors Convention it was noted that various economic indicators show the country’s overall recovery, and in particular, a recovery in the housing sector and consumers investing in their homes in the coming years.  Cosentino’s North American CEO, Eduardo Martinez-Cosentino, says, “The company is ready to face up to give a quick and quality response to the opportunities of a country that is starting to grow again, and where consumers have more resources for home refurbishment, which is our primary business segment.”

In the 17 countries where it operates it own subsidiaries, the Cosentino Group supports its distribution through innovative, distribution and service platforms called centres. With a total client focus, the Cosentino centres integrate different uses and functions, such as offices, distribution warehouses, training space, product and brand showrooms, as well as a sales and promotion network. Today, the Spanish company has 60 of these centres operating around the world.