Cosentino UK and Silestone is excited to announce that it has been awarded the accolade of ‘ Display Support of the Year’ at this year’s annual KBSA supplier awards. The awards were presented by the Kitchen Bathroom Bedroom Specialists Association at the KBBR Kitchen Conference. 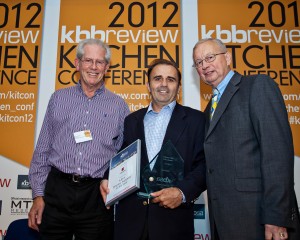 The awards recognise excellence in those companies that supply products to KBSA retailers and are the only awards of their kind that represent the views of retailers and not a panel of judges.

Christophe Gontier, managing director for Cosentino UK and Ireland says, “We are delighted that the kitchen studios we work with have chosen Silestone as the display supplier of the year!  We work closely with our valued fabricators to make sure that our marketing support is second-to-none, as we want to enable kitchen studios to offer the very be to their customers and increase their sales.”

Retailers voted for their top companies as part of the 2011/12 KBSA supplier survey, which has provided valuable information about the amount of business generated by retail members for corporate members.