UK, 8 May 2012. The Spanish multinational and world leader in the production and distribution of quartz, natural stone and recycled surfaces, Cosentino is launching a new Silestone App for the iPad and iPhone. 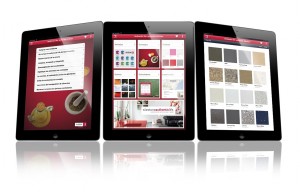 Designed to bring the Silestone® brand even closer to designers, interior decorators, architects and consumers, the Silestone® App provides a range of information about the brand, enabling users to explore the product’s characteristics, its wide range of colour options, sizes and finishes. It also allows users to calculate the square meters of Silestone® that will be required for a kitchen and bathroom project and contains a section with interesting tips for food preservation and how to achieve and maintain maximum hygiene in the kitchen and bathroom. 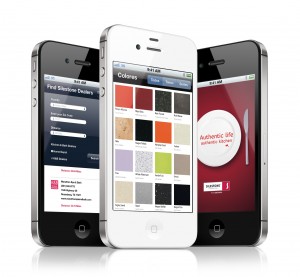 A gallery of images for kitchens, bathrooms and other spaces showcases the different applications and benefits of Silestone® worksufaces. Functional, beautiful and extremely hygienic, Silestone® quartz worksurfaces are composed of over 90% natural quartz crystals; only three other natural minerals; diamond, sapphire and topaz are harder than quartz. Silestone® has nearly four to five times the flexural strength of granite, bacteriostatic protection and a high resistance to scratch, stains and heat.

Available in both English and Spanish, the App will be updated regularly to implement new functions and uses. The Silestone® App is also equipped with a geographic locator that allows users to find their nearest Cosentino Group dealer.

Silestone® by Cosentino, worldwide leader brand in quartz surfaces, consists of more than  90% natural quartz. This high-tech material is highly resistant to stains, knocks and scratches, and has a low level of fluid absorption. It also has an exclusive bacteriostatic property, several product guarantees and certificates and the upper level of service, quality and responsibility of the Cosentino Group. Silestone® comes in over up to 60 colors, three textures and several different formats. Thanks to these special properties, Silestone® surfaces are highly suitable for the kitchen, bath and other demanding areas such as laboratories, hospitals, hotels, restaurants and so on.

Silestone® was the first  quartz surfaces brand to advertise in the biggest publicity event in the world, the US Superbowl. In addition, is personal sponsor of three-time motorcycle World Champion, Jorge Lorenzo.

The Cosentino Group currently has 6 factories, 15 kitchen and bathroom surface production centres in the US, more than 70 distribution points or Centres worldwide, and a staff of over 2,200 spread across the globe. From its headquarters in Almeria, Spain, the Group distributes its products and brands in more than 60 countries, and directly manages and controls its own facilities and infrastructures in 17 countries: the USA, Mexico, Brazil, Australia, Spain, Sweden, the United Kingdom, Ireland, Germany, Austria, the Netherlands, Belgium, France, Switzerland, Norway, Italy and Portugal. Currently 80% of its turnover comes from international markets.