Silestone®, the worldwide leading brand of quartz work surfaces has sponsored the Chefs’ Choice Award, won by Spanish Restaurant Mugaritz, run by chef Luis Andoni Aduriz. The prize is chosen by the most renowned gastronomic professionals and was awarded by Santiago Alfonso, Marketing Manager for the Cosentino Group during the presentation of the 2012 World’s 50 Best Restaurants. 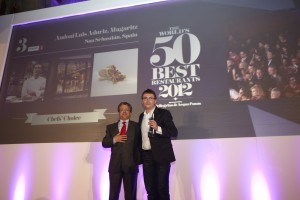 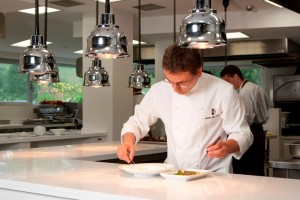 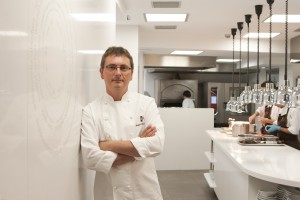 The ceremony was held on Monday 30 April in London’s Guildhall to commemorate the 10th anniversary of these prestigious awards, organised by Restaurant magazine.

The event was attended by the world’s finest chefs, various professionals from the gastronomy sector and key international journalists.

Silestone® trays were designed for the evening in a range of colours and were used to serve guests who were also given an elegant set of Silestone® coasters as a gift following the ceremony.

This is the second time that Cosentino has attended “The World’s 50 Best Restaurants” sponsored by S.Pellegrino and Acqua Panna as a sponsor. In 2011, Silestone® sponsored the award “The Highest New Entry”, which was given to chef Brett Graham’s London restaurant The Ledbury.

“For the Cosentino Group it is a real honour to form part of this esteemed list recognising the best restaurants in the world. Thanks to its extraordinary characteristics, Silestone® is a product that is found in prestigious top restaurants all around the world. The presence of our brand at this event is once again proof of Silestone®’s ongoing commitment to chefs, restaurateurs and gastronomes from all over the world”, says Marketing Manager, Santiago Alfonso, who attended the gala and personally presented the World Chefs’ Choice Award, sponsored by Silestone®.

The list of the World’s 50 Best Restaurants is compiled by “the Academy”, a group of more than 800 international leaders in the restaurant industry. This Academy is formed by 27 different regions from all over the world. Each region has its own panel, with 31 members and a chairperson presiding over them. These members are highly respected food critics, chefs, restaurateurs and gastronomes, each with seven votes. Of these seven votes, at least three should go to restaurants outside the member’s own region.

The complete list with the prize-winners can be seen at: www.theworlds50best.com

It will also appear in the May issue of Restaurant magazine. The Guide to the World’s 50 Best Restaurants, sponsored by S.Pellegrino and Acqua Panna is available now.

Guests at the event had the opportunity to experience the gala live via the social networks:

May 2, 2012 Categorised in: ant, News
Previous article
Cosentino Group presents its latest collections for the US market at the Kitchen & Bath Industry Show 2012