The Kitchen & Bath Industry Show 2012 (KBIS 2012) is the most important kitchen and bathroom trade fair in the U.S.

In the US, The Cosentino Group is involved in an ambitious expansion plan and is also opening new Centers. Currently it has 22 Cosentino Centers, a distribution hub in the port of Houston, eight wholesale distributors and 15 kitchen and bathroom worktop manufacturing factories.

24 April 2012 – The world leader in the production and distribution of quartz, natural stone and recycled surfaces, Cosentino is attending the Kitchen & Bath Industry Show 2012 (KBIS 2012) from the 24 to 26 April in Chicago. This important event showcases products, new developments and innovations in the kitchen and bathroom industry. 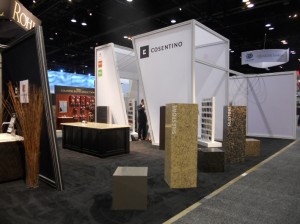 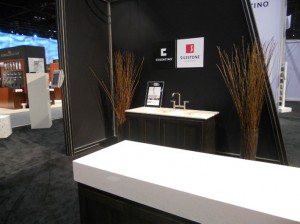 The Cosentino Group is attending this key event with the aim of building new business relationships and strengthening existing ones with distributors, customers and suppliers in the U.S. market.

The Cosentino stand will feature the Stonium series of Silestone® colours, Silestone® bathroom collection, the innovative Integrity DUE sink and a new range of Sensa by Cosentino® granite colours; a complete range of products tailored to the requirements of the U.S. market.

The multinational will also be showcasing its revolutionary recycled surface Eco by Cosentino®, which is composed of 75% recycled materials, including mirrors, glass, porcelain and vitrified ash.

During the Kitchen & Bath Industry Show 2012, the Cosentino Group is a sponsor of the “Uncontained” exhibition, which can be seen in the centre of the trade fair and where Silestone® has a large presence with products. The world’s leading brand in quartz surfaces is also shown in several kitchen and bathroom designs, as well as a spectacular bar in the centre of the space.

The Cosentino Group is involved in an ambitious expansion plan and is opening new Centers both in the U.S and globally. Out of the 70 plus Cosentino Centers that the company has across 17 countries around the world, 22 of them are located in different U.S. cities. There is also a distribution hub in the port of Houston, eight wholesale distributors and 15 kitchen and bathroom worktop manufacturing factories.

The Cosentino Group currently has 6 factories, 15 kitchen and bathroom surface production centres in the US, more than 70 distribution points or Centres worldwide, and a staff of over 2,200 spread across the globe. From its headquarters in Almeria, Spain, the Group distributes its products and brands in more than 60 countries, and directly manages and controls its own facilities and infrastructures in 17 countries: the USA, Mexico, Brazil, Australia, Spain, Sweden, the United Kingdom, Ireland, Germany, Austria, the Netherlands, Belgium, France, Switzerland, Norway, Italy and Portugal. Currently 80% of its turnover comes from international markets.