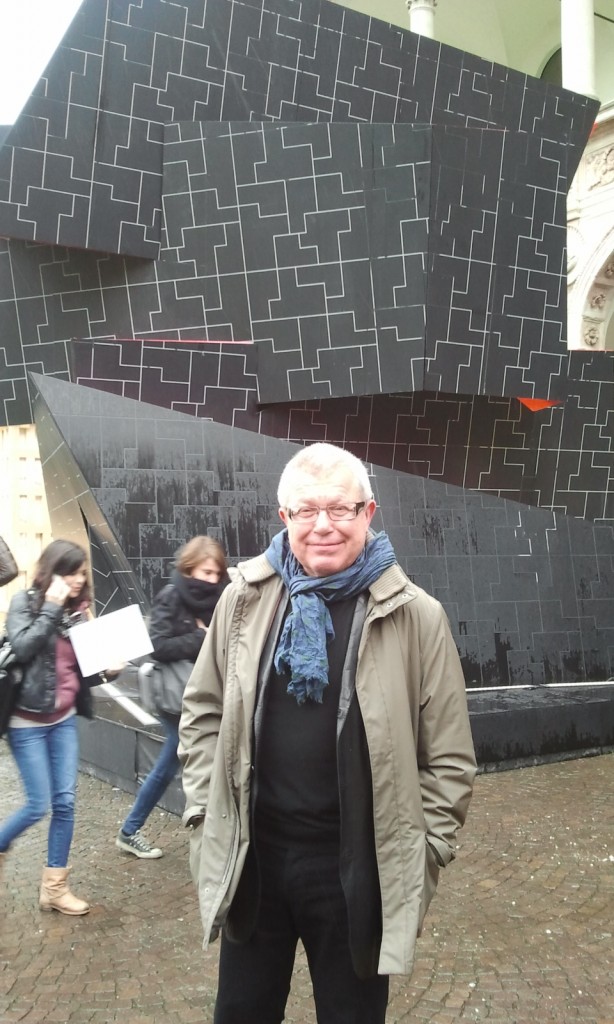 for download click image
Cosentino Group, worldwide leader in the production and distribution of innovative surfaces for architecture and design has teamed up with the prestigious architect Daniel Libeskind for the first time.

The project entitled Beyond The Wall is installed in the Cortile d’Onore Seicentesco of the Università Statale in the framework of the event “Interni Hybrid/Metissage Architecture & Design”.

Daniel Libeskind’s Beyond The Wall is a unique architecture and design project realized with Silestone® quartz surface in its innovative matte “Suede” finish. The result of this collaboration between Cosentino Group and Libeskind Design is a spectacular polycentric spiral. 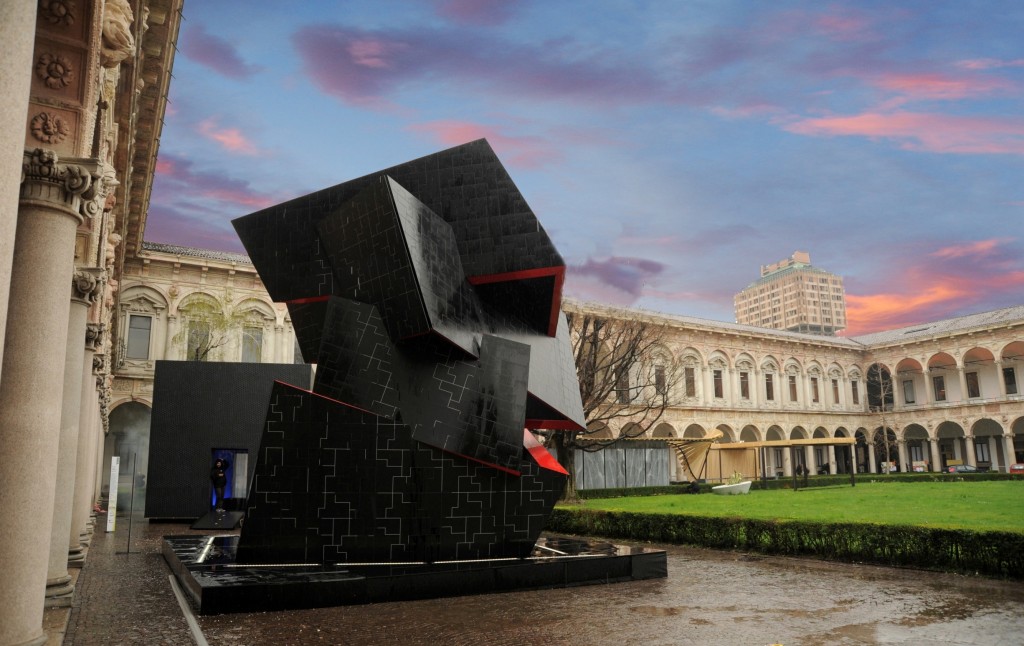 The installation, based on the infinite possibilities of the spiral, is a unique structure.

It is not a traditional spiral with a single center and axis, but a contemporary spiral which opens a plurality of directions along many different trajectories; a polycentric spiral, propulsively twisting to a dramatic zenith. 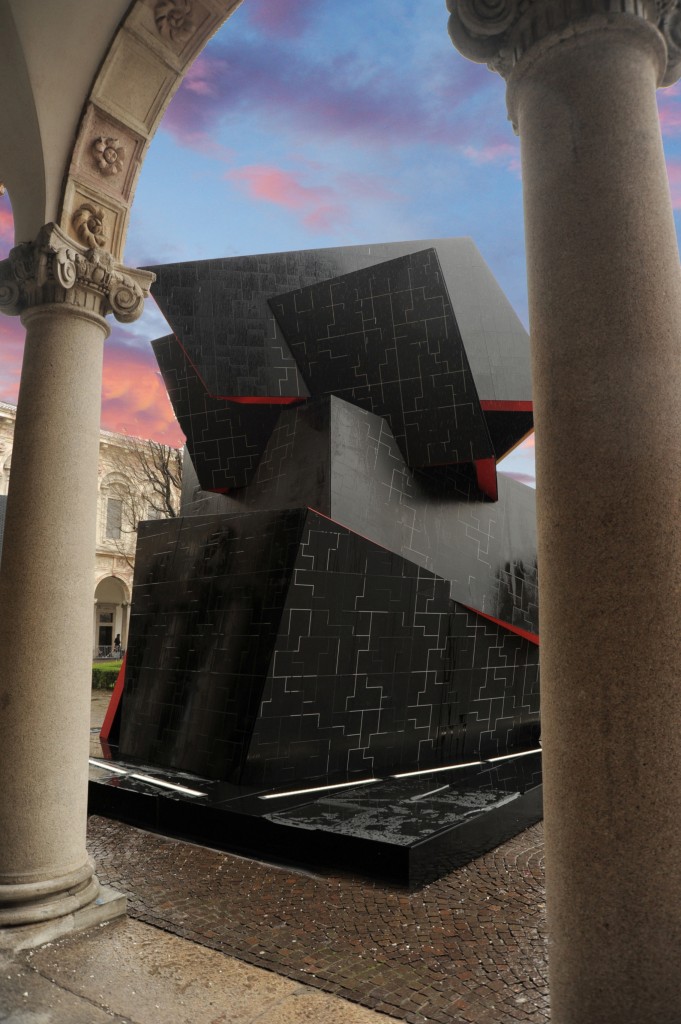 The external material of the wall is the bacteriostatic quartz surface Silestone® in its new matte finish Suede, whose geometry forms a contemporary fractal pattern related to the Golden Section. The pattern is integral to the wall structure, carrying within itself the structural logic of modulating scale and proportion within an endlessly fascinating surface. A kind of shiver should run up the form—an overlaying of a pattern that would break scale and dissolve the strength of the rising, twisting wall planes. It’s a mathematical mosaic, a mobile net that would run and break without repeating: a wholly modern concept of a tile, a ‘fractile.’ The aim is to find a similarity that never quite repeats, and to do that the surfacing would have to be a-periodic. It fits and locks together in an open-ended logic, as a network develops. The tiling has to be a growth of strange branchings.

This project shows Libeskind’s unique approach to architecture as a language capable of narrating the story of the human soul; a hybrid and wide-ranging force, at once a narrative, a method, an art form, and a way of thinking about the world. 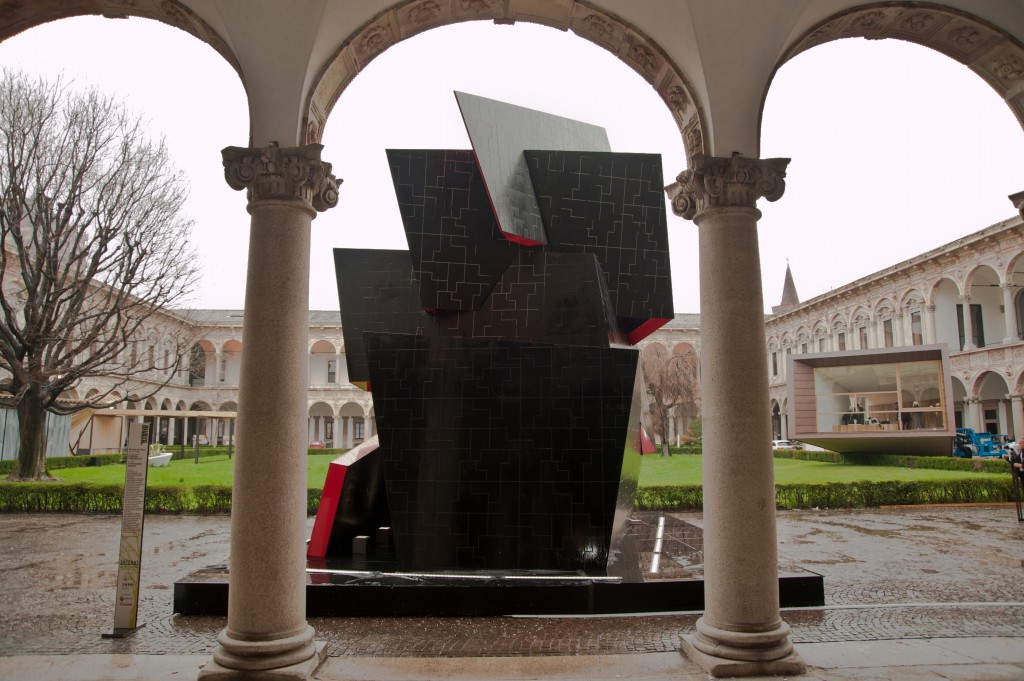 The external material employed for Beyond The Wall project, Silestone® by Cosentino new Suede matte finish quartz surface, has been developed by the Cosentino Group R&D department and offers a unique feel to touch owing to its beauty and elegance, as well as an extraordinary performance with total color consistency and quality.

Silestone® quartz surfaces features the unique Silestone bacteriostatic property, which guarantees maximum hygiene in all its applications. Silestone consists of more than 90% natural quartz and is highly resistant to stains, knocks and scratches, and has a low level of fluid absorption. Silestone® comes in over up to 60 colors and several different formats. Pioneering quartz surface, Silestone® has revolutionized the global stone industry and its growth has been unstoppable up to the point where it has become the world’s leading quartz surfacing brand.

PR Beyond The Wall by Daniel Libeskind in exhibition in Milan