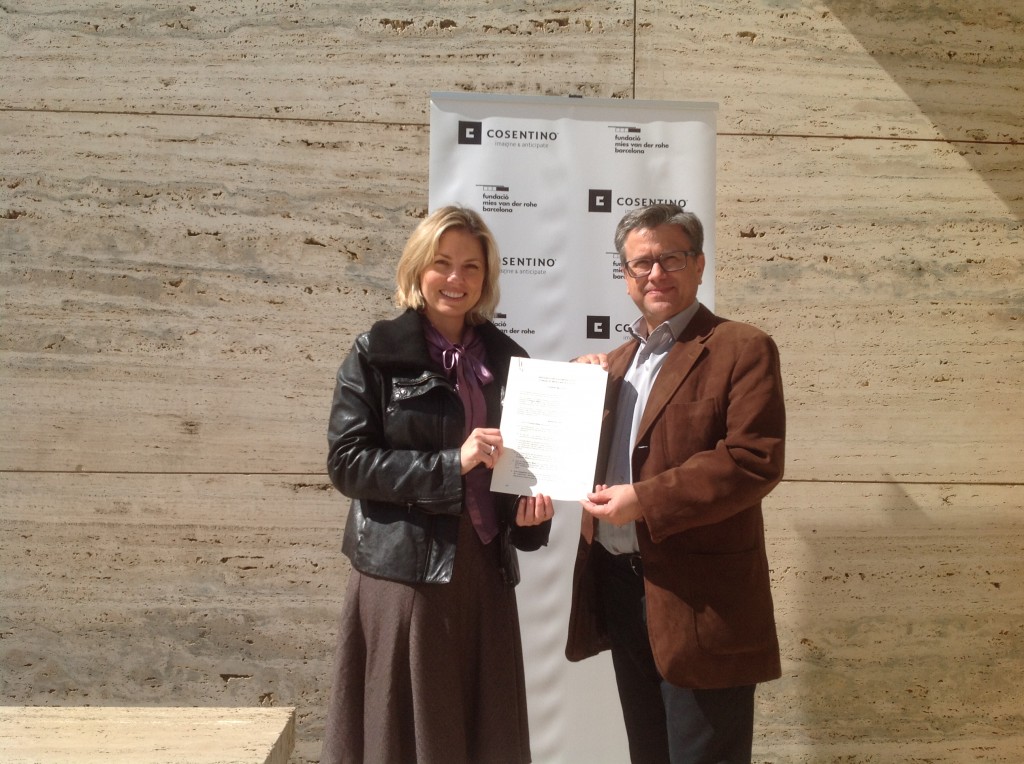 The Spanish multinational, Cosentino Group and the Mies Van der Rohe Foundation have signed a partnership agreement via which the company will sponsor all the activities developed by the Foundation in 2015. The signing of this agreement took place at the legendary German Pavilion designed by architect Ludwig Mies van der Rohe, located in the heart of Montjuic (Barcelona), between Giovanna Carnevali, Director of the Foundation, and Santiago Alfonso, Director of Marketing and Communications for Cosentino Group.

One of the most important actions carried out by this Foundation is the organisation of the biennial European Union Prize for Contemporary Architecture – Mies van der Rohe Award, whose main purpose is to recognise and reward quality for architectural creation in Europe.  This coming 7th and 8th of May the presentations by the five finalists vying for the prize for this 2015 edition will be given. The winner will be announced on the 8th May at a ceremony held at the German Pavilion in Montjuic.  The European Commission supports these architecture awards – one of the most prestigious worldwide – for which 420 applications were submitted for the current edition.

The company values and supports the tireless path that the Foundation has devoted to the promotion and dissemination of cultural debate with regard to the problems faced by contemporary architecture. It also works to organise and promote awards, classes, courses, symposia, exhibitions, publications and research related to architecture from the perspective of its urban condition.

As Santiago Alfonso, Director of Marketing and Communications for Cosentino Group stated, “our mission as a company is to imagine and create innovative high value surfaces for the world of architecture and design. With this premise we fully share the Foundation’s goal to promote the discussion and dissemination of best practices and experiences with regard to contemporary architecture”.