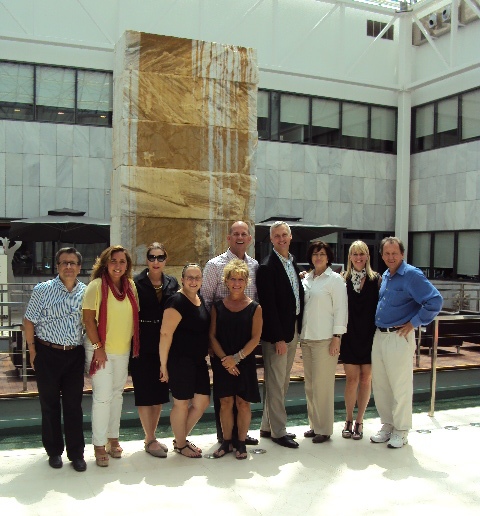 This week Grupo Cosentino, the world leader in the production and distribution of quartz surfaces, natural stone and recycled surfaces, welcomed a visit from the American Interior Designers Association (ASID). ASID is the longest-standing and most important association for interior designers in the American continent, grouping together more than 30,000 designers in the United States.

Seven members of the board of directors of ASID travelled to the head offices of Grupo Cosentino, located in Cantoria (Almería), lead by Lisa Henry and Randy Fiser, President and CEO, respectively, of ASID in the United States.

During the visit to the Almeria-based company, the members of ASID met with Francisco Martínez-Cosentino, President of Grupo Cosentino, and held an interesting workshop focussed on design trends in the United States. To round off the day, they went on an extensive tour of the industrial estate of the multinational Cosentino and visited the marble quarries at Macael and Chercos.

Coinciding with this visit, Grupo Cosentino inaugurated, this week, the San Francisco Cosentino Center (California, United States), which will offer personalised service and attention to more than 220 professionals in the sector, including stonemasons, interior decorators, decorators and architects. This new integrated platform of the multinational Cosentino boasts 1,600 square metres of slab warehouse and 340 square metres distributed between offices and an exhibition room.

The inauguration was presided by Eduardo Cosentino, CEO and President of Cosentino North America and by Chad Wold and Brandon Calvo, Manager and Director of Distributors, respectively, of the San Francisco Cosentino Center.

Grupo Cosentino currently has more than 70 Cosentino Centers in 17 countries around the world. Some 22 of these are located in the U.S.