Cosentino Group officially presented, yesterday 28th of October,the book Pabellón de España. Expo Milano 2015 at an event held at the Spanish Embassy in Berlin. This book, sponsored by Cosentino and published by Arquitectura Viva, offers a detailed analysis of the building designed by the architect Fermín Vázquez and his b720 practice for Expo Milano 2015.

Through commentaries by critics Fulvio Irace, Richard Ingersoll and Luis Fernández-Galiano, the book studies the essential features that have defined this project since its start. This work, with bilingual text in Spanish and English, relates the background context of the Expo and the process for the pavilion design and construction until the building’s completion, examining the programmes and content housed inside it.

Moreover, it analyses different matters involved in the architectural project, such as use of materials, sustainability and the representative value of the pavilion as an image of Spain in such a significant event as a universal exposition, held this year in Milan, and which will be concluding on Saturday, 1 October, and which has attracted more than 20 million visitors to date. It should be pointed out that Cosentino cooperates in the construction of the pavilion, and was responsible for one of its most iconic features: the recreation of the tomato genome on the floor of the main entrance using panels of Dekton®.

The presentation event took place yesterday at the Spanish Embassy in Berlin, with close to 100 guests in attendance, including the architect Fermín Vázquez; Antonio Santamaría, counsellor at the embassy; and Santiago Alfonso, Director of Marketing and Communications for Cosentino Group. In Alfonso’s words, “This event and the book are a way of closing an intense cycle which for us began with the first works we carried out for the pavilion, and which continued with the presentation of the compilation publication Spain Builds and the exhibition that concluded here in Berlin yesterday.”

Couples&Co, a mirror-image of Spanish architecture 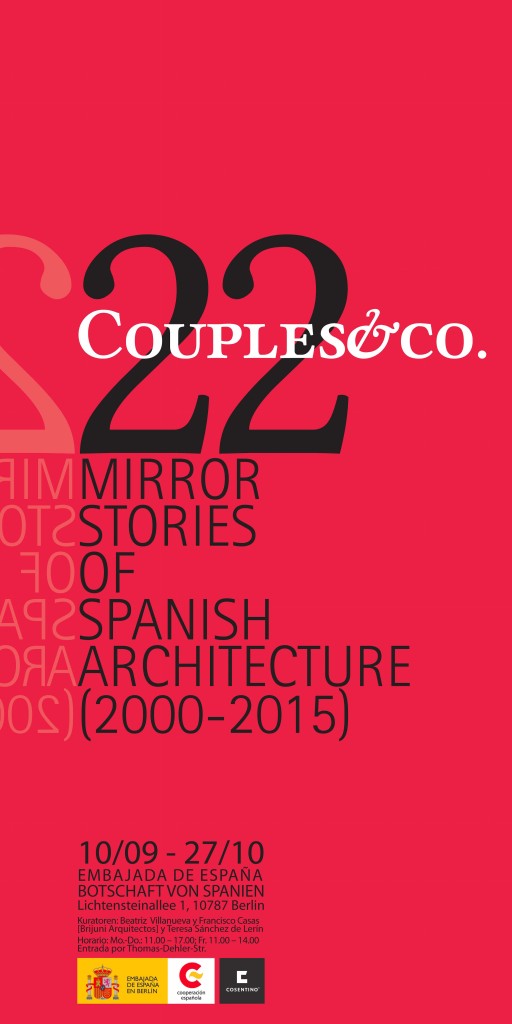 This event was also the closing ceremony for the exhibition Couples&Co, sponsored by Cosentino, which had been on show since 10 September at the embassy’s exhibition space to present a particular view of Spanish architecture over the last fifteen years. Under the direction of commissioners Beatriz Villanueva, Francisco Casas and Teresa Sánchez, the exhibition gave a unique reading on the most recent history of Spanish architecture. Twenty-two architectural practices working in teams of two provided a mirror-image of themselves, with the revelation that the last sixteen years may be split into two symmetrical and continuous visions in time, although asymmetric and discontinuous in both approaches and outcomes.

Both the exhibition and catalogue showed that this short period of time can be divided into two equal, eight-year periods, with the centre of this period being the epicentre and trigger for change in architectural structures, strategies and production. It offered a close look at the future of Spanish architecture, which aims to conquer other spaces in which the discipline becomes blurred, with the emergence of surprising scenarios and new opportunities. Among the practices participating in Couples&Co were Archikubik, Churtichaga y De la Cuadra Salcedo, Cruz y Ortiz, Elap, Nieto Sobejano and Mansilla y Tuñón.