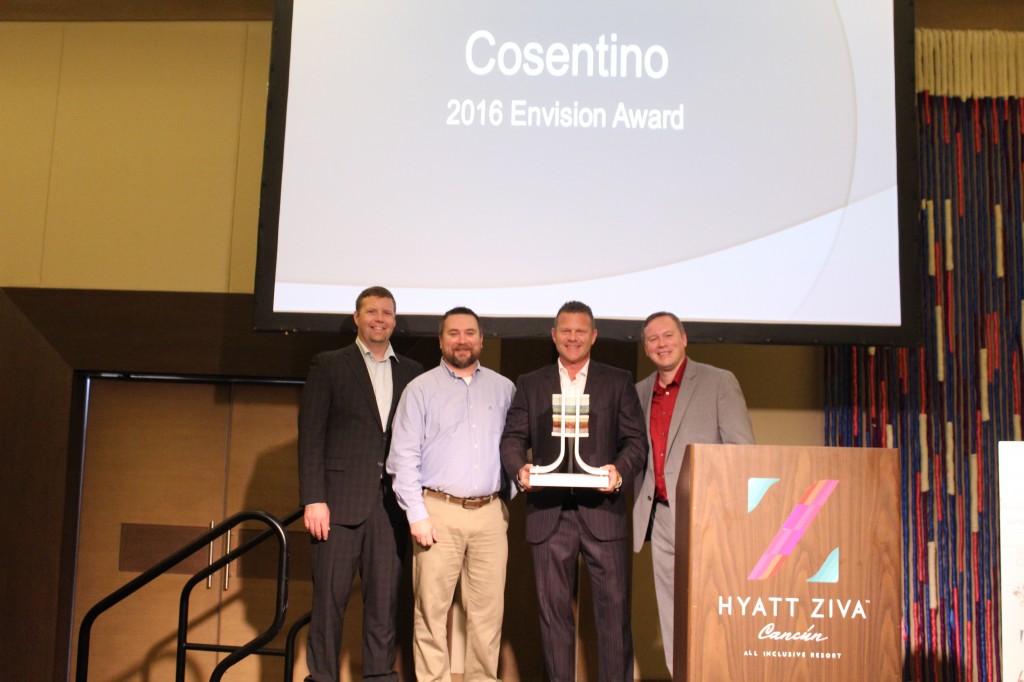 The Envision Award is given to the ISFA member that excels in creating an imaginative and stand-out product for the surfacing industry. Cosentino was nominated for the award in recognition of its development of Dekton large-format tile which allows traditional countertop fabricators to expand into flooring with a durable, high quality product that can be used in both interior and exterior applications. Brandon Calvo, COO Distribution Cosentino North America, was in attendance to accept the award for Cosentino.

Through its 18-year partnership with ISFA, Cosentino has supported the Association’s commitment to industry growth, advancement and education by sponsoring and participating in nearly 30 ISFA events, conferences and seminars. “Cosentino has continually shown its support for surface and countertop fabricators over the years,” said ISFA Communications Director Kevin Cole. “Not only have ISFA members benefited from Cosentino’s gracious support and devotion to the industry, but fabricators all around the world have benefited from the company’s generosity and dedication. We are fortunate to have so many great corporate partners like Cosentino to help us to improve the industry for the good of all.”

In addition to receiving the 2016 Envision Award, Cosentino was a recipient of the 2012 ISFA Associate Member of the Year Award. Cosentino also received the Envision Award in 2014 in recognition of its innovation following the introduction of Dekton, an ultra-compact surface that was the first of its kind.

“Just as Cosentino is committed to innovation, we’re grateful for the partnerships and alliances with associations like ISFA that share in our vision to always pursue excellence,” says Lorenzo Marquez, VP of Marketing for Cosentino North America. “We’re honored to receive the Envision Award in recognition of our company’s advancements that allow fabricators, a vital segment of our business, to expand their application abilities which in turn helps grow their business.”