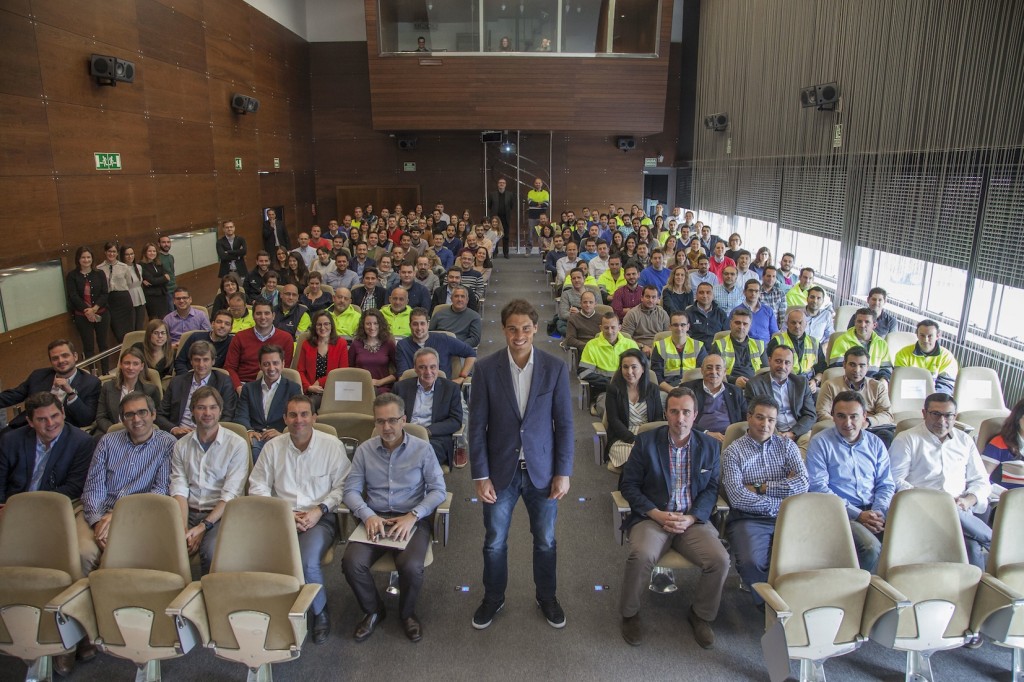 This morning, Rafael Nadal, one of the most important Spanish athletes of all times, visited Cosentino Group’s headquarters in Cantoria. On his arrival, he was welcomed by Eduardo Martínez-Cosentino, the Group’s Sales Director, and by Santiago Alfonso, Marketing and Communication Director, who expressed their “warmest welcome on behalf of the more than 3,300 persons from all over the world who work at Cosentino”. 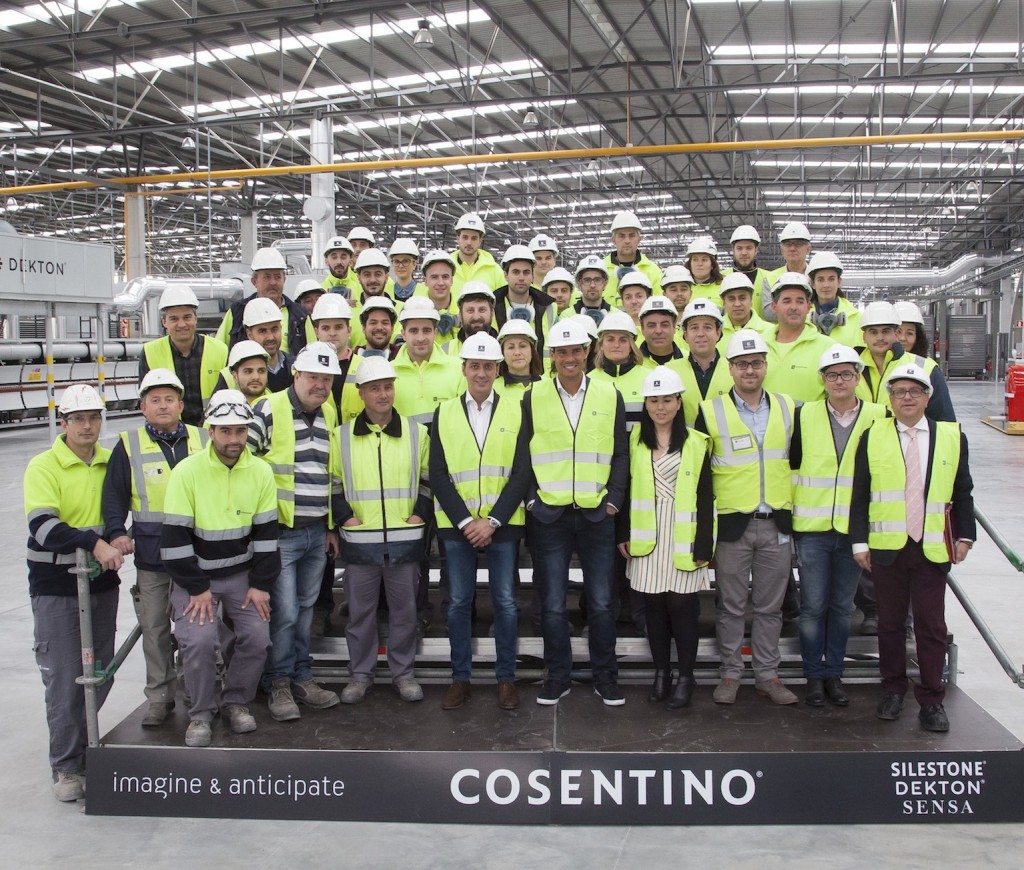 This visit is part of the relationship established at the end of 2014 between the company and Nadal, in which the Cosentino ultracompact surface brand Dekton® is the sponsor of the “Rafa Nadal Academy by Movistar” that the tennis star plans to open in May 2016 in Manacor, the town where he was born. Dekton® will also be one of the main materials used to decorate the Academy, thus revealing all the architectural and design possibilities this product offers, as Dekton® will be used on façades and on floors and other surfaces of the different facilities. 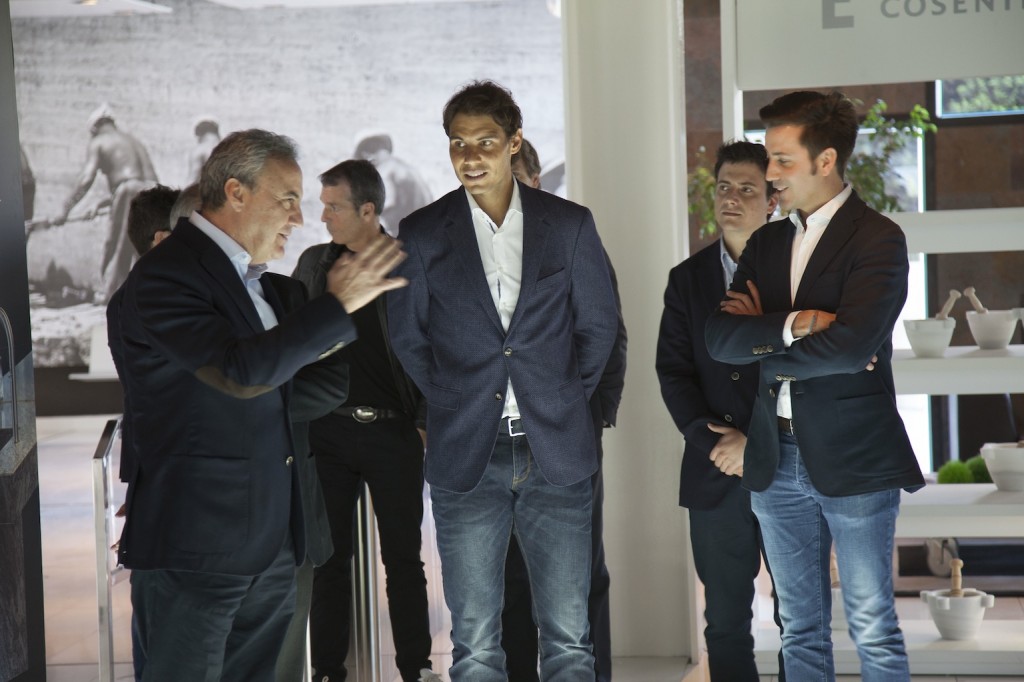 After being welcomed, the tennis star visited the main offices of the multinational and the showroom at its headquarters, accompanied by the Group’s Chairman, Francisco Martínez-Cosentino. He then took part in a moving and emotive event with employees held in the Auditorium. In a heart-to-heart conversation with Eduardo Martínez-Cosentino, Nadal set out the objectives of the Academy as an integrated educational and sports project dedicated to instilling values among young people. During the talk, he also emphasised the importance of teamwork and of surrounding oneself with the best possible talent. In the words of Rafa Nadal: “the Academy this is a project we started many years ago and we hope to open it at the end of May,  and I am very excited. It is a project of the present and of the future, in which I will be very involved, and we hope that it will be a worldwide reference. I am very thankful to Cosentino’s collaboration in this project, and their materials will have a key role.” About the visit he highlighted that: “it seems to me incredible that a company with such magnitude was set up in this place. I can only congratulate Cosentino family, and show my deep respect for what they are doing”.

Afterwards, Nadal visited Cosentino’s industrial park, stopping at the Dekton® plant, where he was able to see for himself the process used to manufacture this revolutionary material, and the specific particularities of the new Dekton® XGloss. On occasion of Nadal’s visit to the Spanish multinational’s headquarters, today the company communicated the launch of a new high tech ultra-compact surface line Dekton® XGloss, which is characterised by its high gloss shine. 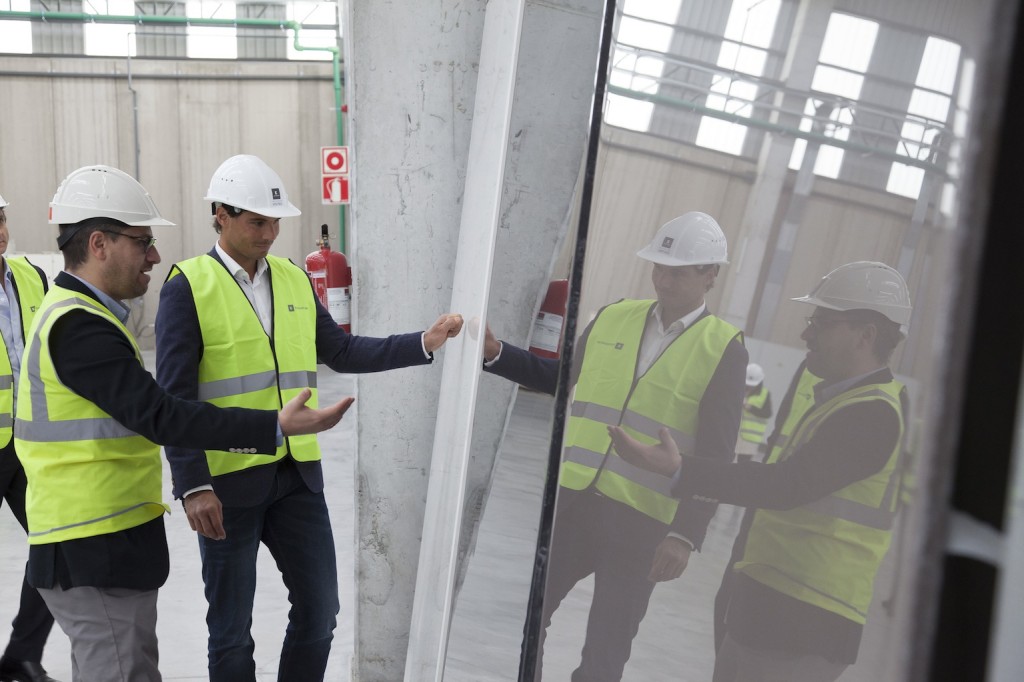 It is the result of almost two years of work by the company’s R+D department, and is a pioneering, exclusive treatment based on nanotechnology with the name “Nanocoating Process”. In addition to the high gloss, this technology gives this Dekton® series a series of water-repellent properties that generate extraordinary resistance to stains. Through this development, Cosentino has once again demonstrated its permanent capacity for innovation and shows that Cosentino is a company that has energised the sector of architecture and design surfaces that is always at the forefront of new trends and design.

As Eduardo Martínez-Cosentino Alfonso, the Group’s Sales Director, says, “having Rafa Nadal with us in our plant in Almería makes us all feel proud and we are deeply grateful to him. More than ever before, we can relate to him, not only to his natural, easy-going character, but to his ambition, strength and his unfailingly positive attitude. Furthermore, we are looking forward to seeing him again soon at the opening of his Academy, and we consider it a great honour to be a part of it”. 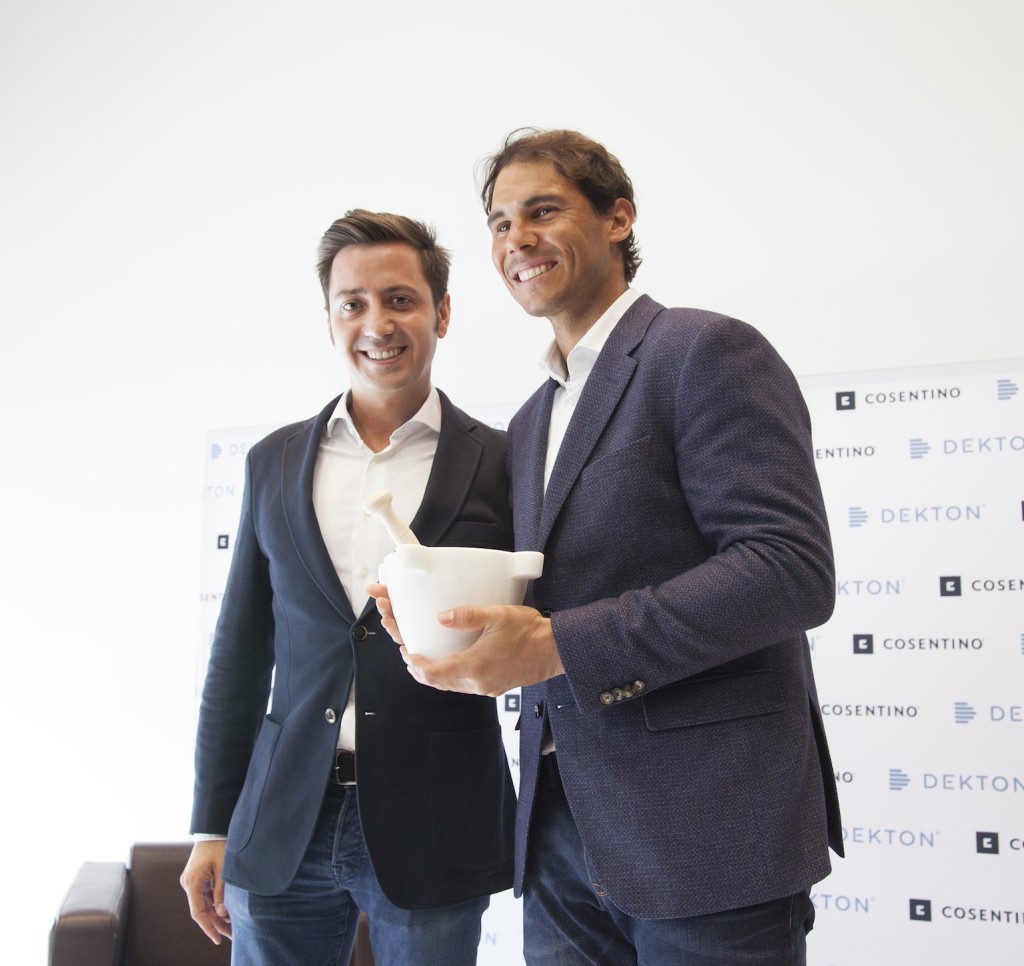 “This has been a really special day and in fact, his visit to the Dekton® plant has given us the perfect opportunity to launch XGloss, an important new extension to this brand which will allow us maintain our leading international position in the industry and continue to position us as a company of reference in our sector”, concluded Martínez-Cosentino. 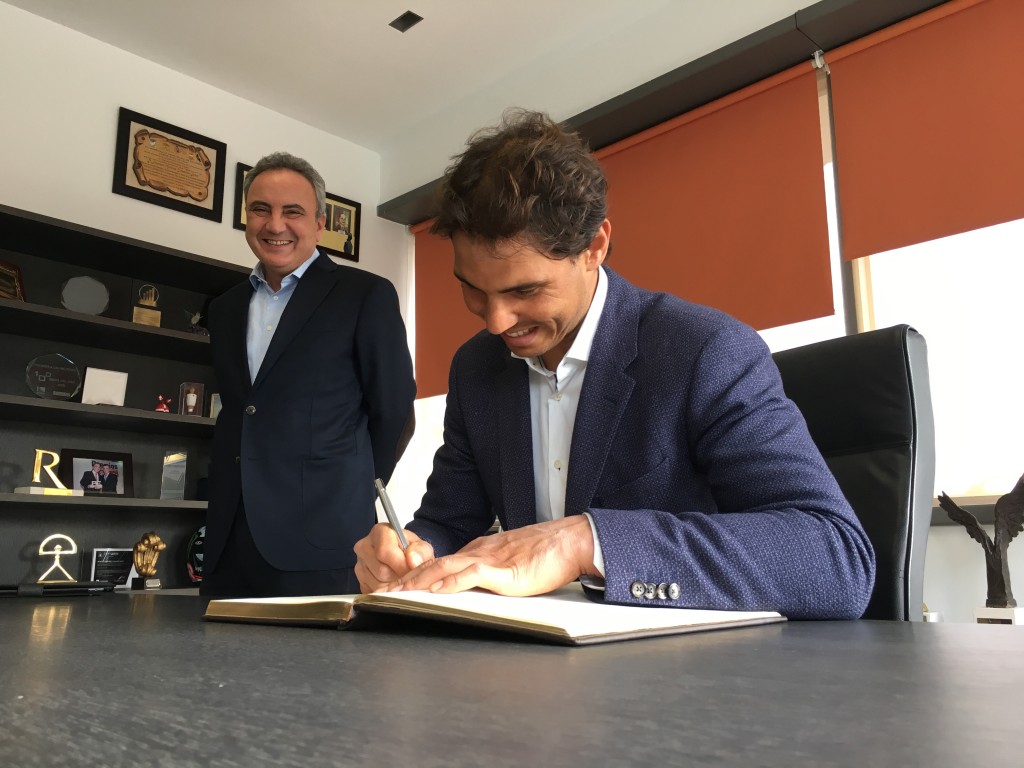 The day ended with a huge family photo with several employees at the Dekton® plant and the signing of the visitors’ book of honour of Cosentino, a company with which, as has been demonstrated today, he shares common values such as continuous improvement, the ability to rise to challenges and a permanent quest for leadership. 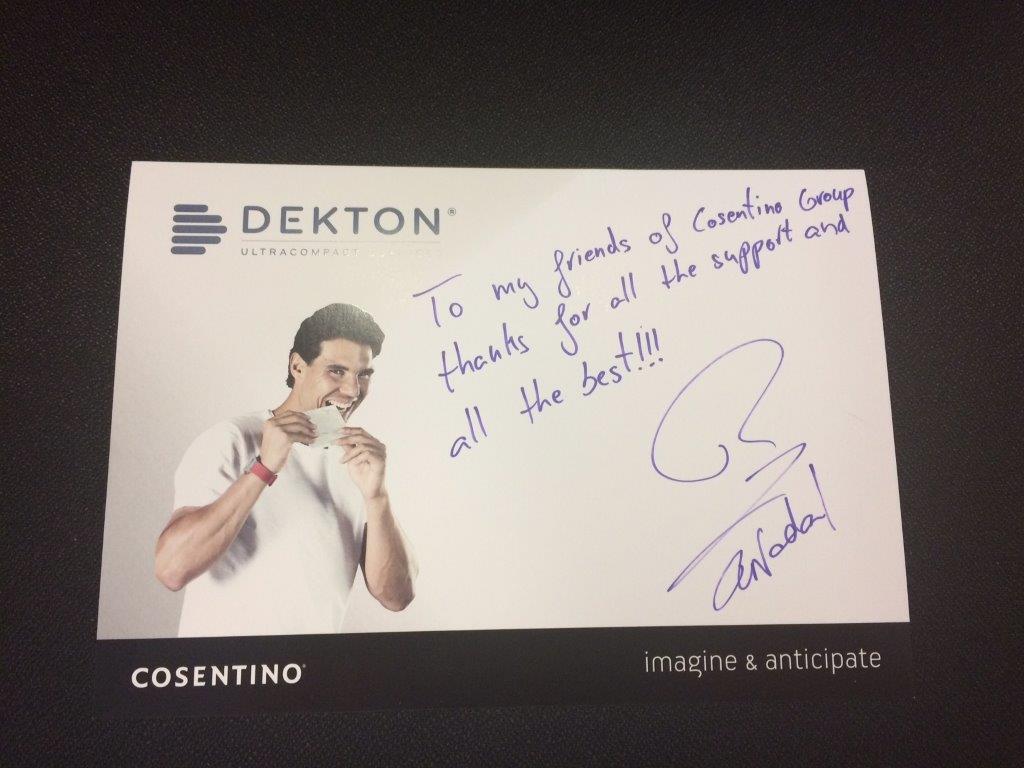