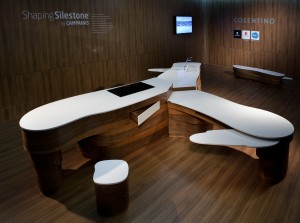 Cosentino, a global leader in the production and distribution of quartz, natural stone, and recycled surfaces, is pleased to debut an innovative kitchen installation during Milan Design Week called Shaping Silestone® created by renowned Brazilian designers, Fernando and Humberto Campana. The new project will debut at Milan Design Week (April 17-22) during the Salone del Mobile and will be on display at Fuorisalone 2012 at the Superstudio Più, (Via Tortona 27, Milan.)

The Shaping Silestone® project is a unique modular piece featuring three main components that reflect the idea of a Swiss army knife, creating a multi-functional kitchen island. The Campana brothers have relied on advanced sculptural design and the durable, eco-friendly elements of Silestone natural quartz and ECO by Cosentino, an eco-friendly surface comprised of 75 percent recycled materials, to create a piece that expertly integrates and unifies various elements, including the countertop, stove, sink, and table.

The flexibility of the Shaping Silestone® concept creates a multitude of uses, from serving as the heart of a culinary creation to acting as the main social space in the home. The design showcases front panels made using fine hardwood veneer from a walnut tree cut more than a half a century ago and features the Integrity sink by Cosentino. Several chairs that are integrated under the same concept also accompany the piece of furniture.  Shaping Silestone® thus becomes an active piece of furniture, in a mobile structure, with different stories to tell and different roles to play.

The brilliant design showcases how Cosentino products stand out for their functional design, versatility and modern aesthetic.This is the second time Cosentino Group and the Campana Brothers have collaborated on a major design project.  The project will be open for viewing daily during Milan Design Week from 10am – 9pm from April 17 – 22, 2012.