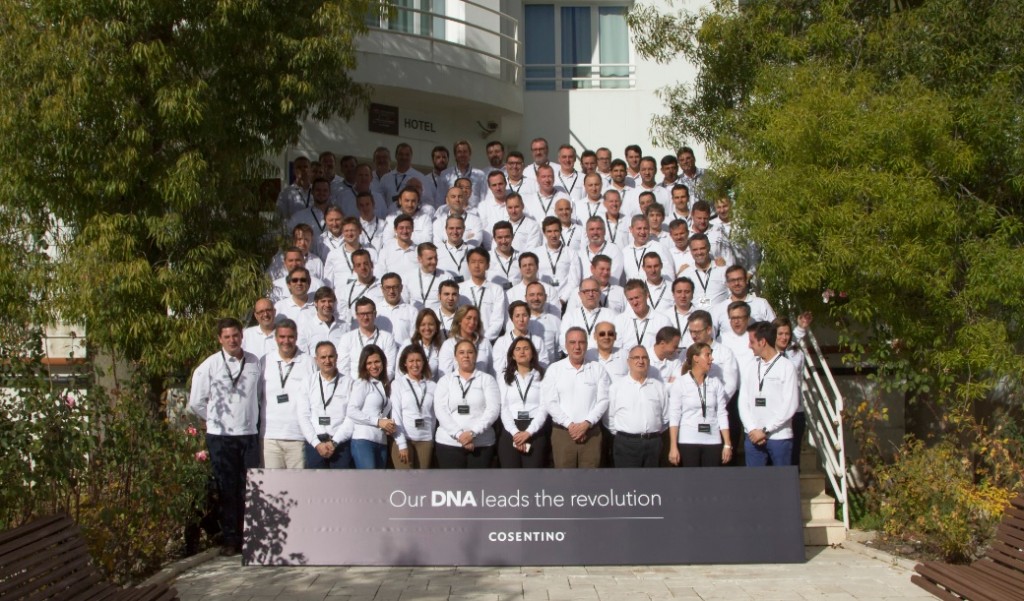 New York, NY (December, 2014) – Cosentino, the global leader in the production and distribution of innovative architectural and design surfaces, announced at its annual Strategic Conference that the company will end 2014 with a sales presence and fixed assets on five continents, a milestone achieved following the recent opening of a logistics platform in South Africa. Additionally, Cosentino expects to end the year with gross revenue of $684 million, representing an increase of 14.7 percent compared to 2013, with over 90 percent of its sales generated outside of its global headquarters in Spain.

In an opening address, Francisco Martínez-Cosentino, President of Cosentino Group, highlighted the worldwide launch of the ultra-compact surface Dekton; the growing digitalization of the organization; and the company’s unwavering commitment to job security at all production centers. The address identified the diversification of niche markets as a future challenge, in which the incorporation of new talent and increased internal promotion of employees based on their continuing education will be a driving force.

More than 70 representatives attended the annual conference, held December 15 and 16 at Cosentino’s headquarters in Almeria, Spain. This year’s event included the incorporation of representatives from the company’s new markets of Japan, Turkey, Israel, Canada and South Africa.

Continued international expansion, linked to the variety of innovative systems for sales and distribution, has been identified as one of the most notable achievements for the year. In 2014, Cosentino opened 10 new Centers, one Cosentino City Center, and established a presence in the new markets of Canada and Turkey. Currently, Cosentino operates directly with employees, fixed sales, and production assets in 29 countries, and is projected to employ close to 3,000 individuals in the year ahead.

Innovation was a central theme for the year, as Dekton, the revolutionary ultra-compact surface, garnered worldwide recognition and numerous accolades. It has enabled the company to increase activity in the world of architecture and design, as well as strengthen its presence in new market segments such as façades and outdoor applications.

Over the course of 2014, Cosentino celebrated a number of partnerships with well-known individuals in the international fields of architecture and sports. The company continued its collaboration with the architect Daniel Libeskind, including a presence at the Venice Architecture Biennale; partnered with Italo Rota at Milan Design Week and with Steffen Kehrle for the “House of Dekton” project. In the United States, Cosentino renewed its commitment to the Make It Right foundation. In October, the company announced a new partnership with professional tennis player Rafael Nadal in which Cosentino will contribute materials to the star’s tennis academy.