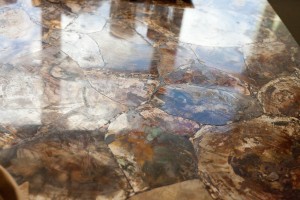 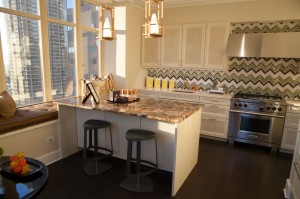 To celebrate the magazine’s fifth year, the Anniversary Home looked to transform a spectacular space on the 23rd floor of the Ritz-Carlton Residences with the area’s most well-known designers including Edelmann to design the kitchen, Anne Coyle, for the foyer and powder room; J Tracy Hickman for the Master Bedroom; James E. Ruud for the Second Bedroom; Tom Stringer for the Living Room and Jessica LaGrange for the Dining Room. CS Interiors’ designers drew inspiration from Chicago couple, Katrina Markoff & Jason Scher of Vosges Haut-Chocolat.

When designing the kitchen, Edelmann envisioned Markoff and Scher’s love of elegance and timeless design, sourcing materials from all over the world. As a statement piece, Edelmann used Cosentino’s semi-precious stone line, Prexury in Petrified Wood for the kitchen island and Silestone natural quartz in Haiku for the surrounding countertops. Paired with a colorful, patterned backsplash and a smattering of eloquent antiques including a Hungarian ebony table, the space exudes Edelmann’s signature trademarked aesthetic, “Modern-ique.”

“I feel that the kitchen is the heart of the home, and should be anything other than ordinary,” Edelmann said. “The materials I selected, including the surfacing, evoke a sense of worldliness and international flavor, with a bit of whimsy and color.”

A press preview kicked off the Anniversary Home on October 10; the space was open to the public, students and interior fans during its two-day OPEN HOUSE from October 12-13. Open House tickets were purchased for $10, and all proceeds will benefit both the Lynn Sage Foundation and Infant Welfare Society of Chicago.