SILESTONE BY COSENTINO PARTICIPATES IN “HOUSE UNITED” WITH TY PENNINGTON 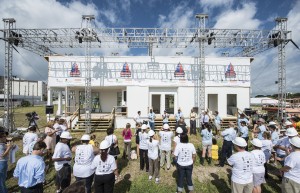 The project was a collaboration between Heroes at Home, Rebuilding Together, Craftsman, NextGen Home built by Champion and Bank of America, who asked Americans across the country and delegates at both conventions to work together in a community service program to build a home for one of our country’s deserving military veterans. One half of the home was built during the Republican National Convention in Tampa, FL on Tuesday, August 28 and the other half of the home during the Democratic National Convention in Charlotte, NC on Monday, September 3.

Delegates, elected officials and their staff, convention attendees and media in both locations were invited to literally swing a hammer, nail 2 x 4s and paint walls alongside Pennington during the events. The two halves of the home built during the conventions will now be united in Charlotte in the Belmont neighborhood during the month of October and presented to a deserving veteran family.

“We are proud to partake in the House United project,” says Lorenzo Marquez, VP of Marketing for Cosentino North America. “It is an initiative we can all stand behind and is just one way to recognize our incredible military veterans and their families.”

The House United project showcases Silestone by Cosentino’s unmatched array of colors throughout several rooms of the home. Silestone natural quartz is naturally non-porous and never needs to be sealed. It is easy to clean and has high scratch, stain and heat resistance. Silestone is also proven to be a cleaner and safer countertop. It offers a unique combination of built-in antimicrobial protection that safely fights the growth of odor-causing bacteria, mold and mildew along with the assurance of GREENGUARD certification for clean air quality, and National Sanitation Foundation certification (NSF 51) for safe food preparation.