SHAPING SILESTONE®, the innovative furniture unit by the Campana brothers for Cosentino

Cosentino Group, world leader in the production and distribution of quartz, natural stone and recycled surfaces, is at Fuorisalone 2012 with an innovative project developed by Brazilian designers, Fernando and Humberto Campana.

Introducing: Shaping Silestone®, a modular piece consisting of three main components and which recreates the idea of the Swiss Army knife. It can perform a multitude of uses, becoming the heart of culinary creation and a social space to share with others. Shaping Silestone® is the unification of a single idea; ‘all that a kitchen needs’ and follows the suggestive artistic vision proposed by Fernando and Humberto Campana.

In order to convert the kitchen into a versatile living space, the Campana brothers have created a piece which integrates and unifies various elements, including the worktop, stove, table and sink.

This project made from Silestone® quartz surfaces utilises the Integrity by Cosentino® sink. The design is an innovative piece of kitchen furniture with front panels made using fine hardwood veneer from a walnut tree cut more than a half a century ago. The piece of furniture is accompanied by several chairs that are integrated under the same concept.

Shaping Silestone® thus becomes an active piece of furniture, in a mobile structure, with different stories to tell and different roles to play.

Ultimately, Shaping Silestone® can become what any customer wants from it, because it takes on the role and personality of each person who enjoys this unique piece of furniture designed by Fernando and Humberto Campana.

This is the second time that Cosentino has worked with Fernando and Humberto Campana, two unquestionable experts in the world of international design.
In 2010, they jointly presented the project “Campanas for eCosentino” at the Milan Design Week, the project was an artistic interpretation of the recycled surface ECO by Cosentino®. This project toured the main European design fairs. 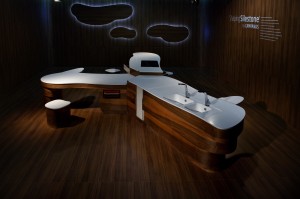