Silestone®, the world leader in quartz surfaces, and Jorge Lorenzo, the three-times world motorcycle champion, have renewed the sponsorship agreement they signed a year ago. The Spanish brand will therefore continue to be the personal sponsor of the Majorcan motorcycle racer, who bears the Silestone® logo on his  personal cap.

The sponsorship agreement was renewed on 30 May at an exclusive event in Barcelona that was attended by the multinational Cosentino Group -the manufacturer and distributor of Silestone®- and Jorge Lorenzo.

Over 150 guests attended the event, including members of the Cosentino Center in Barcelona’s customer loyalty programme and numerous media professionals.

The Cosentino Group was represented by Vicente Martínez-Cosentino, Manager of the Cosentino Center in Barcelona, and Santiago Alfonso, the Group’s Marketing and Communications Director.

The Majorcan motorcycle racer took part in all the activities organised for the occasion; he greeted guests, signed autographs and spoke to the media present at the event.

As a result of the agreement, Silestone® will continue to be Jorge Lorenzo’s personal sponsor for the 2012-2013 season of the world motorcycle championship and will take part in different events to promote the brand. 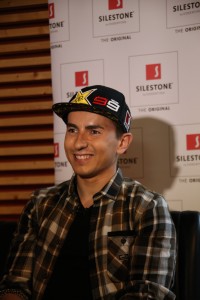