BY ANTONIO CITTERIO PATRICIA VIEL AND PARTNERS FOR DEKTON® BY COSENTINO

The global leader in the production and distribution of innovative surfaces for the world of architecture and design, the Cosentino Group is set to astonish visitors of Milan Design Week with an extraordinary installation: Deep Words Light, born from the collaboration between Cosentino and Antonio Citterio Patricia Viel and Partners.

The project, completely designed with the ultracompact surface Dekton® by Cosentino, will be shown as part of the event “Interni, Energy for Creativity 2015” which is taking place in the courtyard of the University of Milan from April 13th to May 24th.

Inspired by the Teatro Olimpico of Palladio, Deep Words Light creates an outdoor theatre in the largest courtyard of the University of Milan, with four Dekton® steles that form the backdrop for an ideal stage in the 17th-century portico. 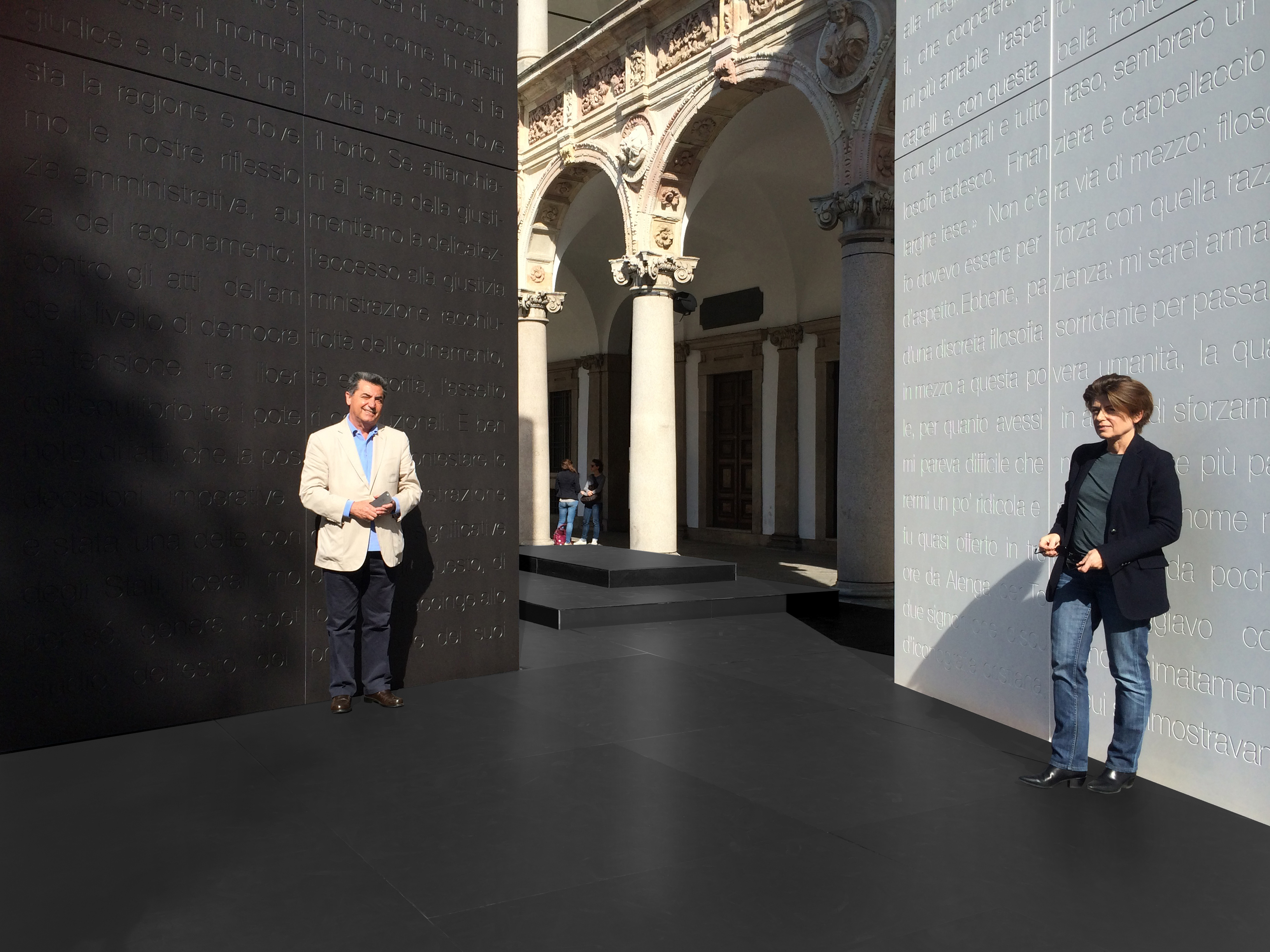 The material used to make these “wings”, the ultracompact surface Dekton®, is a mixture of raw materials that are used to manufacture glass, porcelain materials and quartz surfaces. The Dekton® surface can recreate any type of material with a high level of quality. It is manufactured in large format (320 cm x 144 cm) and thin thicknesses (0.8 cm, 1.2 cm and 2 cm).

Each stele is composed of 15 slabs measuring 142 x 320 cm to form an enormous panel with a triangular base 2.84m long, for a final height of 9.60m. Supported by a ballasted metal structure they are balanced at the base by a large platform 17.50 x 7.35m that symbolically becomes the stage of the theatre itself, while distributing the weight and stabilising the steles thanks to a concealed inner structure.

Each of the slabs of the long sides of the structure is customised with a text engraved with an innovative milling technology developed by the Cosentino R&D department. The personalised engraving on the huge steles is further emphasised by the oblique lighting from the base, thanks to LED lighting built into the platform.

Finally, the stage – the 17th-century portico – takes on a theatrical red hue through the use of specific lights in the evening that create an ethereal backdrop, almost the opposite of the great materic impact of the “sculptures” in Dekton®. 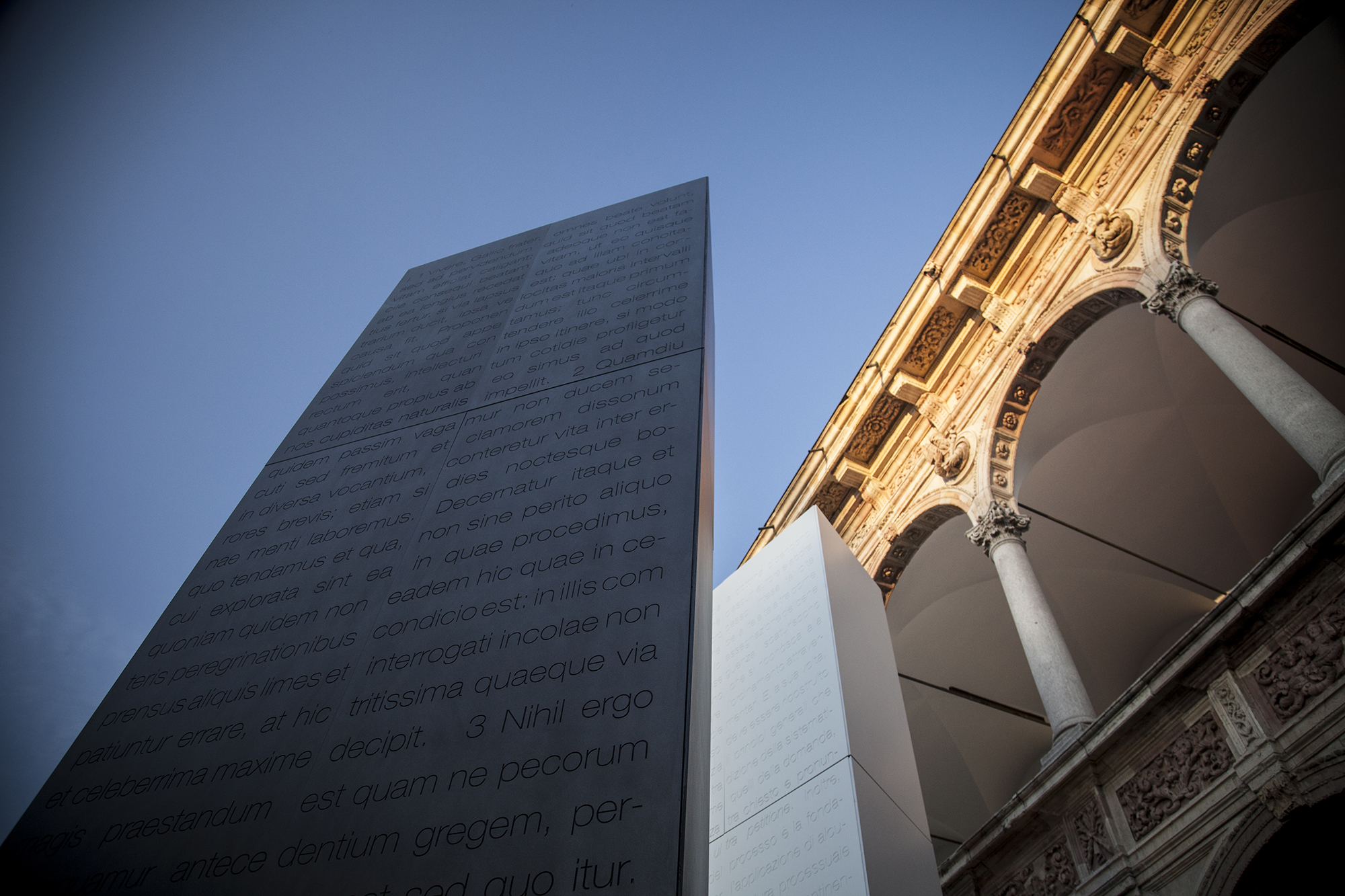 Deep Words Light is a way to narrate the city of Milan, its history, culture, social and economic world, in an extraordinary way, during the year of the Expo in Milan, on the global stage. “There’s a need to abandon sophisticated communicative languages aimed at sector professionals, and reach out to make the extraordinary world of international creativity and a production system on a European scale accessible to a different, non-habitual audience, which we attempt to persuade thanks to the miraculous continuity our city is able to generate between its history and the most extreme frontiers of modernity”, said architect Antonio Citterio.

The University of Milan, home of literature and law, is perhaps the place of excellence of this phenomenon. The installation is like an open theatre to present the architecture of the Richini courtyard in a sculptural design produced with a sophisticated technology of a highly innovative ultracompact surface like Dekton®.

The 10 metre high partitions, sorrounded by the 17th-century portico, bring the words of the Italian culture into the composition in the light and shadow of the engraving of the mass. Ancient and modern letters, philosophy and law, taught in this place of research and study make their voices heard through light, shadows and perspectives constructed by the panels that bear these fundamental texts, engraved on their cladding. No images, no forms, just the weightless light of deep words.

BY MONICA FÖRSTER FOR DEKTON® BY COSENTINO 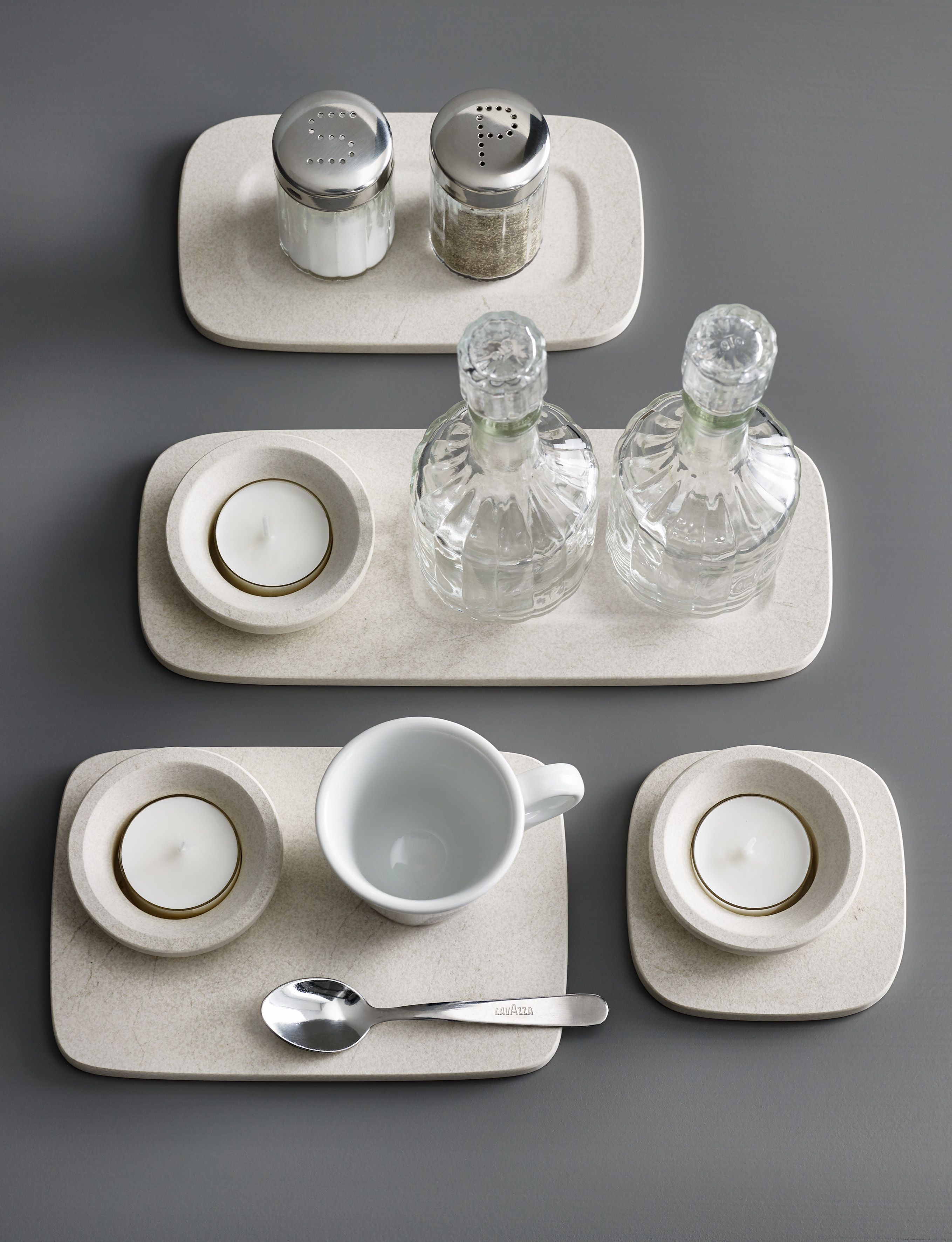 Cosentino is also exhibiting the Twilight Collection made with the ultracompact surface Dekton® by Cosentino in Milan. Twilight is a collection of table accessories and outdoor candleholders designed by Monica Förster Design Studio for Bianchi Café & Cycles and will be presented by Cosentino during the Milan Design Week 2015.

Dekton®’s unique resistance to heat and thermal shock have inspired the designer to create the collection. “Dekton feels like a Hi-Tech, futuristic material. The material’s unique qualities; its resistance to heat, thermal shock and the fact that it is ultracompact makes it a very exciting material for me as a designer to explore. We have therefore created a collection which is based on these qualities”, explains Monica Förster.

Antonio Citterio and Patricia Viel are the founders of Antonio Citterio Patricia Viel and Partners, whose headquarters are in Milan. The firm works internationally, developing complex projects on all scales in collaboration with a qualified network of specialist consultants. The company has a strong expertise in providing detailed project documentation covering both the shell and core and the interior of a building; from building envelope to interior fit-out, including bespoke millwork elements and furniture.

Among the types of projects developed by the firm are: town planning schemes, residential and commercial complexes, industrial sites, restructuring of public buildings, workspace planning, offices, showrooms and hotels. The firm is also active in the sector of corporate communication, handling projects of coordinated image, installations and graphics.

Recent built works include the Ermenegildo Zegna group headquarters in Milan (Italy), the Bulgari Hotel in London and the Technogym Village in Cesena (Italy). Projects currently under construction include the Expo Milano 2015 site accessibility system and a residential tower in Taichung (Taiwan).

The firm has taken part, and continues to take part, in numerous national and international competitions and invitations, and is UNI EN ISO 9001:2008 certified. A monograph entitled “Antonio Citterio: architecture and design” was published in 2007 by Skira Publishing.