• Silestone is the official supplier of quartz worktops in “The World’s 50 Best Restaurants 2013” and last night during the award ceremony different worktops in the Silestone green colour, Verde Fun could be seen. The Silestone Institute also gave attendees its recently published book “90 cm above ground” 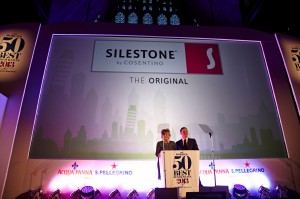 London, UK, 30 April 2013 – The worldwide leading brand of quartz work surfaces, Silestone has sponsored the “Chefs’ Choice” Award, won by restaurant Alinea run by chef Grant Achatz and located in Chicago. This award forms part of “The World’s 50 Best Restaurants 2013” list and is chosen by the most renowned gastronomic professionals in the world.

Santiago Alfonso, marketing director at the Cosentino Group was in charge of presenting the award to Grant Achatz, during the presentation in London’s emblematic Guildhall last night. 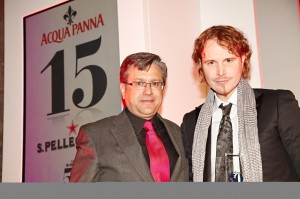 The event was attended by the world’s finest chefs, various professionals from the gastronomy sector and key international journalists.

As the official supplier of quartz worktops for the prestigious event, several different Silestone worktops could be seen last night including the green ‘Verde Fun’ colour. A series of Silestone trays in different colours were used by the organisers to serve cocktails to the guests, who were also presented with an elegant set of Silestone coasters as a gift following the ceremony. 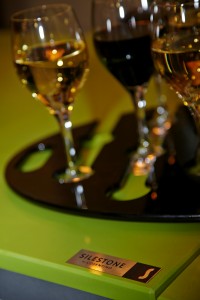 The Silestone Institute, an international platform dedicated to the study of the kitchen as a social and work space, gave guests a copy of its recent publication “90 cm above the ground”. This book defines the concepts and standards of current professional kitchen installations and researches haute cuisine requirements. Leading chefs such as Andoni Luis Aduriz, Jose Andrés, Dan Barber, Carles Abellán and Joan Roca, among others, have contributed to the book.

This is the third time that the global company has sponsored “The World’s 50 Best Restaurants 2013”. In 2012, Silestone also sponsored the “Chefs’ Choice”, which went to Spanish restaurant Mugaritz run by Andoni Luis Aduriz. In 2011, Silestone was the sponsor of the “Highest New Entry Award”, which went to London restaurant The Ledbury run by Brett Graham.

The list of the World’s 50 Best Restaurants is compiled by “the Academy”, a group of more than 900 international leaders in the restaurant industry. This Academy is formed by 26 different regions from all over the world. Each region has its own panel, with 36 members and a chairperson presiding over them. These members are highly respected food critics, chefs, restaurateurs and gastronomes, each with seven votes. Of these seven votes, at least three should go to restaurants outside the member’s own region.